“A film about what school could be, Most Likely to Succeed, debuted at Sundance Film Festival in 2015. After the launch, venture investor and executive producer Ted Dintersmith launched a 50 state tour to promote readiness for the innovation economy. His new book, What School Could Be outlines what he learned. We asked Ted about his journey to advocating for next-generation education.” – Tom Vander Ark 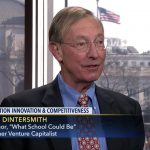